Art and music traditions are abiding fascinations for me, and for most viewers of this site I imagine. Any genre that has been around long enough to be called a tradition will have moved across a good deal of territory, through many transformations, until examples from different periods can at first seem inimical to each other, and yet are soon recognizably of the same stream, the same chain of consequences. How different is Beethoven to Debussy, and yet how easy it is now to recognize them both as classical composers. I have been listening to the two discs of luminous and tranquil music listed above, and while they are both very much of now they have sent me back to a time when the current jazz was so radically different as to seem their antithesis. Bear with me for a few paragraphs. 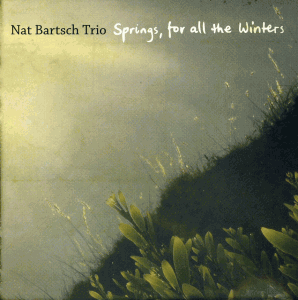 In the so-called modern jazz era when I began listening the blues tonality was meshed with the chromaticism and in some instances bitonality and even atonality of recent classical music. In the collaborations of Miles Davis and Gil Evans, for instance, a music that was impenetrable to some and utterly compelling to others took shape. Dizzy Gillespie and various composer/arrangers had already headed in that direction. Perhaps nothing had penetrated aspects of modern urbanity, of the city, with such felicity. That music derived from this and related forms of jazz was used in gangster movies is very understandable, though it was a case of two-dimensional musical typecasting for those who grasped the music whole. As well as the various Diz big bands, I recommend a wonderfully obscure 1950 Clef recording of Gillespie with strings-dominated arrangements by Johnny Richards (later transferred to Verve, alternative and slightly inferior takes were used, but the same additional Diz Big Band tracks can be heard on both). I mention these rather than many equally influential small combo modern recordings because they set modern orchestral voicings as a backdrop to solos that can be fiery and also speculative, probing, deconstructive, introspective. Listen to Gillespie here and you will be surprised, both by tonalities created within his astounding swarms of notes and by the curious intervals that appear in his contrasting soft, oblique and even introverted passages.

Hard as it is to imagine now, some heard this music as a different language, so different that it seemed to run contrary to The American Dream. At the same time some of the music’s biggest enthusiasts could be found in the place where the dream was extolled and sold. Advertising. I know because I was a teenage layout artist in the advertising department of the Myer Emporium in Melbourne in the period just before the Mad Men era. It must be said that we were a minority in the industry, in which there were many Russell Howcrofts who thought that advertising was the bastion of Western civilization. He’s right of course, but how come we all, or most uf us, hate TV ads to death?

Enough of all that. No sooner had the original modern movement established itself than an alternative began to emerge. This was lighter, more melodic, more diatonic in tonality; inspired more by Lester Young than the big-toned ultra masculine chromaticism of Coleman Hawkins. Cool jazz, in two installments: from the East Coast and the West. The latter – West Coast cool jazz or California cool – became, by the late 1950s the most popular form of jazz, with the Californian Dave Brubeck a household name. Even the anti-jazz faction at Myer agreed to come along and hear him with me in Melbourne and were persuaded by the invention and virtuosity of drummer Joe Morello and the hypnotic floating, running melodic inventions of alto saxophonist Paul Desmond. Chet Baker and, believe it or not The Australian Jazz Quartet were also popular. And so was Miles Davis, who influenced both the cool school and the hard bop movement. Most importantly here, his album Kind of Blue combined blues tonality, mysterious chromaticism and the limpid-pool effect of ancient modes.

Increment by increment, it became possible to be part of the modern movement while employing open diatonic lines. We could mention Keith Jarrett and others, But enough history. We are at a point where jazz can incorporate the crystaline, the pure and singing without sounding retrograde.Which brings me to these two albums by Melbourne pianist/composer Nat (Natalie) Bartsch’s trio. What we have here is a piano approach that draws from baroque and classical music, from folk and from the softer melodic music of the rock era (with a nod to the singer/sonwriters of California as well as their descendants). Springs For All The Winters has the trio’s version of ‘Revelry’ by the Kings Of Leon (which sounds uncannily like ‘Imagine’ by John Lennon, but we won’t puzzle over that any further) and ‘The Sire Of Sorrow’ by Joni Mitchell, which, with its deep bowed bass and rushing-wind cymbal introduction, is full of moving power. To Sail To Sing has ‘Motion Picture Soundtrack’ by Radiohead and ‘Save Me’ by Gotye. The arrangements on these are by Bartsch and all other compositions are by her. Bartsch’s touch we will discuss. Her playing, including the improvised lines, is very clear and open, full of lovely melodies and sunlit running development. Yet this is still very definitely jazz, or at least jazz-related. Both bass and drums teams shade, punctuate and accent, sometimes intricately, introduce cross rhythms, extend the texture of the music and set it riding on the unique buoyancy of the double bass in its various jazz deployments. Both are delicate and precise. On To Sail To Sing, however, Daniel Farrugia is more inclined to introduce a more muscular element, including bright, smashing cymbal play. Far from rocking boat, or upsetting the piano’s serene certainty, it seems to increase it through contrast.

We should mention, before it slips out of mind, Bartsch’s talent for catchy and often beautiful vamp introductions. The voicings can be very modern, or contemporary if you prefer, but instead of sounding dissonant they are reflective and crystalline. Before we run out of space it must be emphasised that this is unusually beautiful music. But even in the most euphoric music you can, in a certain mood, feel a touch of melancholy. Surely it is just the realisation that no golden age lasts forever, nor any life; and that paradise itself did not satisfy everyone, according to the Bible (a curious concept: perfection being not quite perfect). I refer you to Lucifer who got hurled out. Look, I don’t know whether he did or he didn’t, but you get my drift. In the matter of sound and touch, note how Bartsch’s notes are evenly struck, rarely attacked, yet ring and fill the space. It reminds me a little of Roger Woodward playing Debussy, very softly but with the loudness pedal down. I don’t think that is the secret with Bartsch. Not hindering her affecting sound and style is Mal Stanley’s recorded sound, which has exactly the right degree of resonance.

On To Sail To Sing the trio has two guests – the unique vocalist Gian Slater and tenor saxophonist Kieran Hensey, who each appear on a track. We have written quite a bit about Slater. Hensey is a new Melbourne voice for us. Some of the familiar sonic manipulations of jazz saxophone are there, but in a remarkably subtle form. Opening softly in a high register, Hensey reminds us somewhat of East Coast cool tenor saxophonist player Warne marsh, whose entries could sometimes momentarily lead us to mistake him for band-mate Lee Konitz, who of course played alto. When Hensey drops to a lower register the volume scarcely increases but the larger, darker notes have a three dimensional presence. This is exceptionally expressive, finely articulated playing. All round. These are lovely records.

To Sail, To Sing

Springs, for all the Winters,

Nat Bartsch Trio on the web

John's book Take Me Higher was published by extempore. Purchase your copy online or ask for it at your favourite bookshop. (The essays in the book don't appear on this blog)